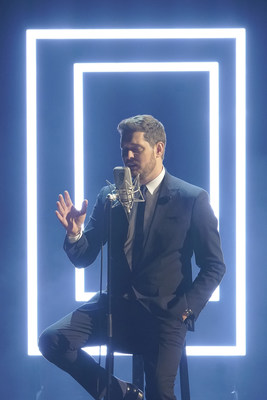 Backed by a 36-piece orchestra, the multi-GRAMMY® Award-winning Bublé performs some of the classic songs that inspired him, including «Fly Me to the Moon», «You’re Nobody ‘Til Somebody Loves You», «My Funny Valentine» and «Just A Gigolo.» Several of his most popular, original tunes, including smash hits «Haven’t Met You Yet,» «Home» and «It’s a Beautiful Day,» are featured as well, along with songs from his new album, «love» ♥ , including «Such a Night» and the timeless «When You’re Smiling.»

«The worldwide, chart-topping Bublé is one of the most sought-after performers in the world. He has sold over 60 million records worldwide over the course of his extraordinary career,» commented Haber.  «He has performed hundreds of sold-out shows around the globe, won four GRAMMYs, and recent shows this past summer in London, Dublin and Australia were seen by more than 150,000 fans. We are delighted to be offering this special at MIPTV.»

ABOUT THE ALFRED HABER COMPANIES
The Alfred Haber Group of Companies – Alfred Haber, Inc., Alfred Haber Distribution, Inc. and Alfred Haber Television, Inc. – together form one of the world’s largest distributors of U.S. network annual events and music specials and are leading independent distributors of primetime reality series, specials, and documentaries. We acquire and represent content from a broad list of clients worldwide, including production companies and television broadcasters. For more information about the Alfred Haber companies, please visit www.alfredhaber.com.