14th edition of the CONCACAF Gold Cup kicks off tonight, to be played across 13 U.S. cities throughout July

MIAMI, July 7, 2017 /PRNewswire/ — Tonight in the New York-New Jersey metropolitan area in front of a capacity crowd, the Confederation of North, Central America and Caribbean Association Football (CONCACAF) kicks off the 14th edition of CONCACAF Gold Cup, this summer’s marquee Confederation championship, which will feature top soccer players and national teams from across the region, and will crown a CONCACAF champion. 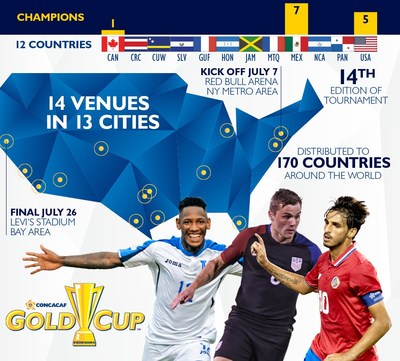 The 12 nations will play in 13 U.S. cities in a span of 20 days, culminating in the final game on July 26 at Levi’s Stadium in the Bay Area, where ticket sales have already surpassed 50,000.

The continental championship will begin Friday, July 7 at Red Bull Arena in Harrison, NJ, in front of what is expected to be a capacity crowd. The opening double header features a Group A match-up of perennial Central American rivals, Honduras and Costa Rica as well as the 2000 champion Canada facing newcomer French Guiana.

Group B will kick off on Saturday, July 8, at Nashville’s Nissan Stadium, with a rematch of the 2015 Gold Cup third-place match between USA and Panama, followed by Martinique and Nicaragua.

Defending champion Mexico will begin its title defense on Sunday, July 9 at Qualcomm Stadium in San Diego, versus El Salvador as the second match of a doubleheader. Curacao and Jamaica will begin play in Group C in the first match of that day.

Visual Assets for Media Members
CONCACAF, together with the Local Host Committees, have prepared visual assets to aid media members in their coverage of this announcement. Click here to access tournament logos, stadium information, photos and video footage of the stadiums.

To view the original version on PR Newswire, visit:http://www.prnewswire.com/news-releases/14th-edition-of-the-concacaf-gold-cup-kicks-off-tonight-to-be-played-across-13-us-cities-throughout-july-300484421.html