As finalists in the Hult Prize Challenge, four Rutgers students have a chance to prove their business idea could help millions of refugees around the world

marzo 9, 2017 As finalists in the Hult Prize Challenge, four Rutgers students have a chance to prove their business idea could help millions of refugees around the world2017-03-09T16:07:00+00:00 New Jersey No Comment 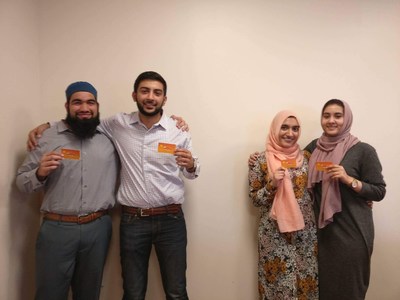 At the regionals on March 4, they captured the top prize against 70 teams from such schools as Harvard, Yale, Princeton and the London School of Economics. Rutgers is the only U.S. school among the finalists from the Boston regionals.

The team’s six-minute winning pitch detailed their idea for Roshni Rides, a business that will run a system of electric-powered rickshaws in refugee settlements, offering residents an affordable way to reach jobs, schools and vital services, including hospitals and markets. The system would use reloadable ride cards similar to the New York City subway’s Metro card. The plan proposes piloting the system in Orangi Town in Pakistan’s port city of Karachi.

«We’ve worked very hard,» said Farooqi, who like the other team members is American of Pakistani ancestry. «This,» she added, «is very personal for us.»

The students have been working as a team on case competitions at Rutgers since 2014 and have won a couple of them, including the Target e-commerce case competition. Farooqi said the Hult Challenge was «definitely the most challenging competition we’ve entered.»

The Hult Prize Challenge, which was started in 2010, is focused on social entrepreneurism and encouraging solutions to the world’s challenges with ideas for innovative sustainable start-ups. This year’s challenge asked participants to pitch ideas that focused on restoring the rights and dignity of people and societies «forced into motion due to social injustices, politics economic pressures, climate change and war.» The Hult Prize Foundation puts the number of global refugees at 1 billion.

Daria Torres, a managing partner at Walls Torres Group, served as an adviser to the team. «Archimedes is known for quipping that a lever long enough can move the world,» Torres said. «This Hult Prize regional win for Roshni Rides is evidence that students at Rutgers University can be a dynamic lever for positive change. Society stands to benefit from their curiosity, ingenuity, humility and optimism.»

As regional winners, the Rutgers team now has the ability to attend the six-week-long Hult Prize Accelerator. In September, they will compete in the Hult Prize Global finals for a chance to win $1 million to help build their plan into an actual business.

Professor Alok Baveja, who worked closely with the students, said the Roshni Rides team embodies a truly inspiring ethos – «Real success lies in having a positive impact on the lives of others.»

«This competition is not about the four of them,» Baveja said, «It is about the difference the four of them will make in the world. This team of supply chain management students, leveraging their diversity and talents toward social good, should inspire the entire Rutgers community.»

Umair Masood, who organized the Hult Prize @ Rutgers, said the students put in hundreds of hours preparing for the regionals.

«In Boston, they excelled at pitching their idea and evoked amazement from the judges, Masood said.  «It’s safe to say that hard work pays off.»

«With the support from all the advisers and mentors from the Rutgers community,» he said, «it’s now time for them to compete in the last round for the seed money to help change lives and make an impact.»

Farooqi said she felt confident going into the regionals, primarily because of the passion and experience of her team. «We are the right people looking at this issue at the right time,» she said.

Follow the progress of the team as they take their plan to the next phase of the Hult Prize Challenge. On Facebook (https://www.facebook.com/roshnirides/) and Twitter @RoshniRides.

To view the original version on PR Newswire, visit:http://www.prnewswire.com/news-releases/as-finalists-in-the-hult-prize-challenge-four-rutgers-students-have-a-chance-to-prove-their-business-idea-could-help-millions-of-refugees-around-the-world-300421355.html