FAR HILLS, N.J., March 8, 2017 /PRNewswire/ — As health care profits shrink, and Obamacare socializes medicine, most doctors are looking outside the medical field for entrepreneurial opportunities.  Tom Maoli, a quintessential entrepreneur, has developed a new investing opportunity that not only delivers an impressive return but also appeals to those who love cars – investing in luxury automobile dealerships.  It’s a new business model, and Maoli is reaching out to physicians with an investment opportunity he thinks will excite them, and so far the results have been positive. 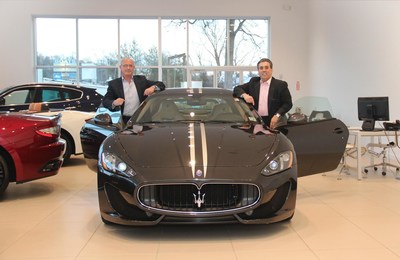 «A well run luxury car dealership can produce a double digit internal rate of return, if run properly,» Maoli says.  And, he should know.  Since purchasing his first dealership – Lexus of Route 10 in Whippany in 2011, Maoli has since expanded his auto empire to include Maserati of Morris County, Alfa Romeo of Morris County, BMW of Springfield and Maserati of Bergen County.  He is also set to close on a Mercedes Benz dealership in Goldens Bridge, New York and he says «there are more in the hopper.»  His luxury dealerships, operating under the Celebrity Motor Car Company brand, are consistently named among the best run in the nation.

The growth in luxury automobile sales over the past few years is well documented and robust.  Both Edmonds.com, as well as Time, com., have reported «that top-shelf brands, with cars generally selling for more than $40,000, represent a big and growing slice of the car business [which, according to the National Automobile Dealers Association, has topped more than 17 million units for the past three years]. They now account for 11% of total new car sales, when measured by number of units sold. Count the dollars spent, and their presence grows even larger. Luxury cars account for 18% of all car sales revenue, worth $100 billion.»

The advantage of Maoli’s concept is that investing in a luxury auto dealership is a viable investment option for those looking for something with a steady, less volatile return when compared with other, traditional options.  He is targeting physicians for two reasons.  «They are always looking for solid investment opportunities, and they generally have a passion for and drive luxury cars.»

The stock market has been on a record run recently, built largely on the promise of corporate and personal tax cuts.  Maoli says «What if the promised tax cuts stall in congress, or come in at much more modest reductions, be prepared for what consider a major market correction.»

Bonds generally act in reverse proportion to stock market.  When people flee from the market, they generally purchase bonds, which only throw off low single digit returns.  And, as far as real estate as an investment option is concerned, the 2007-2008 recession was caused by the real estate market crash.  While it has largely recovered, the recent rise in home sales was below what had been projected by economists as reported by CNBC.  And, continued Fed policy of easy money and its subsequent threat of a bursting asset bubble hangs over the real estate industry.

Which brings us back to Tom Maoli’s investment vehicle – luxury car dealerships.  According to a survey conducted by Medscape.com, sales of Lexus, BMW and Mercedes Benz accounted for nearly 20 percent of all cars purchased by physicians.  But, offering doctors the opportunity to invest in one of those dealerships is new and «sexy» says Maoli.

One physician who has taken advantage of Maoli’s investment opportunity is Dr. Steven Paganessi, a longtime friend of Maoli’s.  Paganessi, a Fort Lee based anesthesiologist with more than 20 years in practice, is an investor in Maoli’s Maserati of Bergen County dealership and several others .  «There were a lot of considerations when I decided to take Tom up on his investment offer.  First, buying into a luxury auto dealership is much more tangible, fun and exciting than stocks or bonds.  And, what I love about Tom’s business model is that it’s proven.  He has been very successful and he sells a tremendous product, backed by amazing service, and he knows what he’s doing.»

Paganessi was a natural fit for Maoli’s first test run in the new business investing model.  The two, both with Italian immigrant roots, have known each other for more than 20 years.  They both come from blue collar backgrounds, have become professionals and, most important, they both love cars.

«What better way to make a solid business investment.  Invest in something that you can drive, recommend to all our friends and family and business associates and it something that’s exciting and something you love, luxury cars, it’s like being a kid in a candy store,» says Paganessi.

If you’re interested in exploring the possibility of investing in an automobile dealership, please contact Tom Maoli at: [email protected].

To view the original version on PR Newswire, visit:http://www.prnewswire.com/news-releases/entrepreneur-tom-maoli-creates-new-investment-vehicle-for-physicians-300420389.html