EWING, N.J., March 23, 2017 /PRNewswire/ — The maker of Trojan™ brand condoms, the most trusted condom brand for over 100 years, announced today its latest condom innovation – XOXO™ by Trojan™. Packaged with a sleek and sophisticated design, XOXO™ by Trojan™ features Softouch latex, which has a soft feel and low latex odor, complemented by an aloe-infused lubricant, creating a more pleasurable and intimate experience. This new offering reinforces the brand’s distinct role in condom innovation and will inspire women to trust their inner confidence and own their sexual health through buying, carrying, talking about and using condoms. 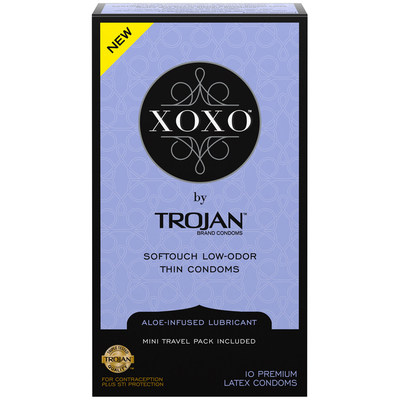 Additionally, each box of XOXO™ by Trojan™ features packaging innovations, including a discreet, mini travel pack that stores up to two condoms for added convenience while carrying on-the-go. XOXO™ by Trojan™ is available in 10-count and 24-count packs at retailers nationwide.

«We are excited to launch XOXO™ by Trojan™ and help foster a change in the way women and men think about who is responsible for buying, carrying and using condoms,» said Stephanie Berez, Group Brand Manager for Trojan™ Condoms. «XOXO™ by Trojan™ has been over four years in the making, with skilled teams dedicated to perfecting not only the product benefits, but the ways in which we excite and inspire people, particularly women, to embrace their inner confidence and trust themselves when it comes to their sexual health and pleasure.»

The launch of XOXO™ by Trojan™ is supported by new research from Indiana University Center for Sexual Health Promotion that explores the perceptions around which partner is responsible for purchasing condoms, among other findings. Specifically, data from the study shows that when seeing a woman purchasing condoms, 96% of people think she is being responsible, smart or don’t find it to be any of their business; only 4 percent of people make a negative or judgmental assumption about a woman’s sex life when she is seen purchasing condoms.1

In analyzing consumer perceptions around which partner is responsible for purchasing the condom, the study discovered only 29 percent of women agree it is the man’s responsibility to purchase condoms. However, only 18 percent of women claim to have purchased the condom for their most recent sexual experience.2  XOXO™ by Trojan™ encourages consumers – especially women – to engage in a mindful dialogue when it comes to sexual health and to ultimately drive cultural change when it comes to traditional gender roles around condoms, sexual health and pleasure.

To learn more about XOXO™ by Trojan™ or other Trojan™ product innovations, visit www.XOXObyTrojan.com or www.TrojanBrands.com. Join and follow the XOXO™ by Trojan™ social conversation through #TrustYourself. To view the original version on PR Newswire, visit:http://www.prnewswire.com/news-releases/new-xoxo-by-trojan-brand-condoms-introduced-to-inspire-confidence-and-encourage-women-to-take-control-of-their-sexual-health-300428225.html