MOUNTAINSIDE, N.J., Jan. 14, 2020 /PRNewswire/ — Paige Electric, a global company dedicated to connectivity solutions, announced a corporate rebranding and a significant expansion of its operations to serve a growing customer base across a range of vertical markets. 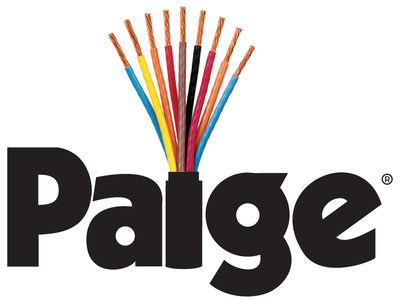 The company known as Paige Electric since its founding in 1958 will now be known simply as Paige, reflecting the broadening applications it serves and its innovative approach to connectivity solutions and technology. Paige is also introducing a new tagline, «Connecting You to More,» to crisply convey the essence of the company’s mission – the enablement of customers to make connections, and the ongoing development of new and innovative ways for them to connect. As part of this rebrand, the Paige corporate website’s address will now be  www.paigeconnected.com.

Additionally, to support its expansion and growth, Paige has moved its corporate headquarters to Mountainside, NJ from Union NJ and has built new distribution centers in Parsippany, NJ and Cerritos, CA. Paige is also doubling the size of its newest factory in Silao, Mexico to nearly 60,000 square feet and has recently implemented a new IT system and various technology upgrades.

Jim Coleman, Paige’s CEO said, «We are excited about these big changes and what they mean for our business, our growth, and most importantly, for how we serve our customers.» Coleman, with nearly 40 years of experience in the cabling and connectivity space began his career at Coleman Cable Systems and later founded Genesis Cable Systems.

Paige Electric, founded by three partners in 1958, later became a public company and was then acquired by a private investment company. In 1996, Paige took the major step of transforming itself into an entirely employee-owned company, which it remains today.

Paige currently has nine business units, each focused on delivering connectivity solutions serving customers across various industries and market segments, including agriculture, asset protection, datacom, HVAC, illuminated sign, industrial OEM, irrigation, landscape lighting, and the submersible pump markets. In early 2019, Paige added its newest business unit called Paige Wireless, the company’s first move into wireless connectivity which will serve customers across all markets. It is already deploying its LoRaWan and broadband networks to rural areas once deemed technologically inaccessible and is currently building out the first state-wide network of its kind in Nebraska.

About Paige
Paige, formerly known as Paige Electric, boasts over 10,000 customers from 10 offices across the globe. Paige manufactures and distributes a diversified set of electrical wire & wireless products, connectorized cable and accessories to the Agriculture, Asset Protection, Datacom, Illuminated Sign, Industrial OEM, Irrigation, Landscape Lighting, and Submersible Pump markets. Paige is employee-owned, from factory worker to CEO, and has more than 200 employees. Visit Paige at www.paigeconnected.com.