Searching for the Superhero Smartphone: A Small Body that Packs a Big Screen Punch

ENGLEWOOD CLIFFS, N.J., Feb. 21, 2017 /PRNewswire/ — Have you ever dropped your phone and cracked the screen? Do you binge-watch shows on your device but think the screen is too small? Does your phone give you low-battery anxiety? 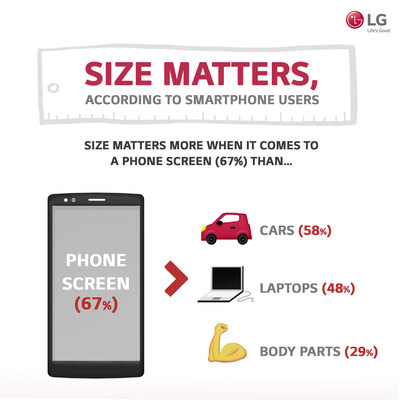 If so, you may want to rethink your current phone situation, along with a majority of Americans who are in the market for a new device this year.

LG recently surveyed thousands of smartphone users and uncovered that size really does matter, as does a phone’s durabiltiy, long battery life and waterproofness1.

While size may or may not matter on a personal level when you’re binge-watching your favorite show, it definitely matters on a technology level. In fact, a whopping 95% of smartphone users feel that having a large screen size is essential, whether they’re watching a favorite show or shopping on their devices, and more say size matters when it comes to a phone screen (67%) than cars (58%), laptops (48%) or body parts (29%).

Wanting a larger screen doesn’t mean wanting a bigger device, though. Nine in 10 smartphone users say it’s crucial to have a smartphone small enough to use with one hand, freeing up the other to multitask.

Smaller-sized phones also mean fewer fumbles. More than two in five admit to dropping their phone while attempting to hold it with one hand, saying this problem arises when a device is too large to use with one hand or fit in a purse/small bag.

Say No to Cracks

Cracked screens might just be the worst case scenario after a phone fumble. Over one third admit that a dropped phone resulted in a cracked screen. And this has left smartphone users in a bit of a broken relationship with their daily phone experience, as 75% wish their device was more durable.

Break Up with a Bad Phone Experience

Whether it’s wanting a bigger screen, more durability or one-handed comfort, smartphone users are still searching for the superhero phone that suits all of their needs.

With a majority of smartphone users in the market for a new device this year, Americans deserve a stunning device that not only provides better durability, waterproofness, and longer battery life, but also breaks down the barriers of large-screen viewing, all while fitting comfortably in one hand. Sometimes, smaller devices pack a bigger punch.

1The LG Smartphone Survey was conducted between January 23 and January 30, 2017 among 2,074 Americans ages 18 and over who own a smartphone, using an e-mail invitation and an online survey. The margin of error is +/- 2.2 percent.

2Among 65% of smartphone users who would rather make sacrifices in their lives than use a smartphone with a cracked screen.

To view the original version on PR Newswire, visit:http://www.prnewswire.com/news-releases/searching-for-the-superhero-smartphone-a-small-body-that-packs-a-big-screen-punch-300410969.html