FAR HILLS, N.J., March 23, 2017 /PRNewswire/ — The 50-year-old Goldens Bridge, New York Mercedes Benz dealership located on New York Interstate 684, has become the newest addition to the Celebrity Motor Car Company, announced the dealership group’s Owner and Principal Tom Maoli.  The move was made by Maoli in order to keep the Mercedes Benz dealership in Westchester after the previous owner’s dealership agreement with the car maker was terminated in November.  It officially opened as Celebrity Motor Car Company Mercedes Benz of Goldens Bridge New York, on March 21. 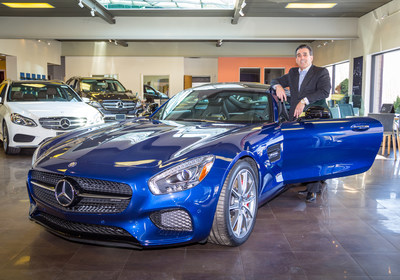 «It’s the only Mercedes Benz dealership in the northern part of Westchester County, which is a wealth belt,» says Maoli, explaining the importance of keeping a Mercedes presence in that part of the county.

«I bet a few of these folks drive a Benz.  It’s important to continue offering the residents in that area of the county the Mercedes option without forcing them to travel many miles.»  Maoli adds, «And we will roll out the Red Carpet and be giving them the real celebrity experience.»

To meet Mercedes’ requirements for the Route 22 dealership, Maoli plans to build a brand new state-of-the-art Autohaus facility, which is a Mercedes mandate to create an «incredible environment for customers and employees and is the perfect finishing touch to your dealership.»

The Celebrity Motor Car Company now consists of a number of luxury brand dealerships in New Jersey, such as Maserati of Morris County, Alfa Romeo of Morris County, BMW of Springfield, Maserati of Bergen County, and Lexus of Route 10, all of which have a well-earned reputation for elevating both the image and operational facets of his dealerships.  For example, Maoli’s Lexus dealership in Whippany is part of Lexus’ «League of Elite» – one of only 30 stores in the entire nation. His dealership is only one of 10 in the entire nation to be awarded the Lexus Circle of Excellence for Finance and Insurance. In 2013 and 2014, Maoli’s dealership won the Lexus Crown Jewel Award.  His BMW of Springfield was recently awarded a Center of Excellence honor, and the BMW parts department has won a global award for point of sales, specifically placing fifth globally and first in North America and the eastern region.

Maoli is also in talks with a number of manufacturers who want him to take over failing dealerships and give him open points, or new outlets, based on his proven success formula and consistent stellar performance.

Maoli is excited about the timing of his new luxury franchise.  Maoli says, «Let’s not forget, Mercedes is not sitting on its laurels.  2017 will be an exciting year.»  He points to the introduction of the Mercedes-AMG E63 S, a new Mercedes-AMG GT and GT C Roadster, Mercedes-AMG-GLC43 Coupe, a new E-Class Wagon, and an all new AMG GT R.

To view the original version on PR Newswire, visit:http://www.prnewswire.com/news-releases/tom-maolis-celebrity-motor-car-company-adds-goldens-bridge-mercedes-benz-to-its-dealership-group-300428527.html